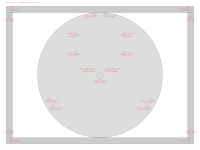 So I tweaked the rig a little... getting the hang of stripping it down and rebuilding it now :)

Bench testing went well, time to put it on the rails with the fully loaded camera. A long story short and it held together pretty well but I was a little scared about the wobbling that was still there. Basically physics was not playing nice and it seems I'm having centre of gravity issues. Well, not me specifically... you know...

So the shots from the run make a nice stop-frame animation and it doesn't look all that bad (the lighting is pretty balanced for a start), but it's still not good enough for my liking - overall it's still wonky between shots because of the wobble and there is still a sweeping motion of the subject that shouldn't be there.

Interestingly enough, with a lighter lens and no tripod head things work out a lot better. So a couple of things to think about - a smaller camera load or a redesign of a few bits. But at least I may get to move the controls to the back of the rig, not sure if that's a good thing yet, or whether the LCD panel will even fit properly, so some more testing and cutting and drilling

The only tweaks made were to up the exposure a bit and crop to fit 16:9