So I've had a productive weekend fiddling with my 3D rig. A complete software re-write and it is geared up for 3D. The rotational control is now redundant so could remove that, but it works well for timelapse so the rig may keep it... Or I may build another one... Hmmm...

Warning, the images in this post will require those really cool red/blue cinema 3D glasses from the 60s. If you don't have any, you can tape a couple of quality street wrappers to your regular glasses :)

So the first edition configuration would move to the right place, stop, trigger the camera and flash for each shot. This meant it could only do about a shot every 2 seconds with a reasonable set of strobes. You could possibly push 1 shot per second, but you'd probably end up with a dead shot somewhere in the pack. Basically it would take about 50 seconds to do a complete run. Don't get me wrong it worked well, but with a human who has to be as still as possible, this was a bit of a nightmare. Here are a couple of shots I managed to get with it. 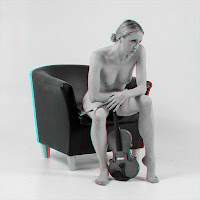 So version 2 of the setup involves a whole load of differences, not just on the rig. Basically though, the rig moves continuously though the shots (so you need a high shutter speed to reduce blur), and uses continuous lighting (so no flash recycle). A whopping 2.5 KW of light in fact. That gave me f/8 at 1/500th, and a run time of 2.25 seconds. Almost anyone can sit still for that. More realistically I reckon I can probably get an artistic shot in 6 seconds.

Glasses on. Here is my test shot. Yep, it's messy, but it has real depth... take that as you will.

Email ThisBlogThis!Share to TwitterShare to FacebookShare to Pinterest
Labels: 3D