I have been doing a fair bit of 3D photography at the moment, the kind that you don't need glasses to see either. This technology is not all that new, it was around when I was a kid and I had a ruler that when you moved it from side to side the image changed - it's basically the same thing as that.

In the 1990's a new style of 3D image came out. They were called "Magic Eye" images or Random Dot Autostereograms to be be more precise. Basically you crossed your eyes or forced them to focus on a point behind the image and then the real image would magically pop out at you. There was never any colour as such and the effect was achieved with the use of what's called a "Height Map" where you define the depths of the image, so for example my test fishy here: 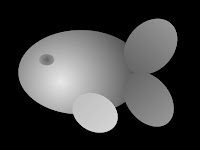 Where it's white is close to you, and where it's black will be far away. Run it through some software and you end up with this, oh, you'll probably want to click on the image to make it a bit bigger: 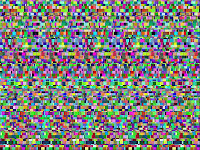 To be honest, I couldn't see them until I was about 25 years old, when my eyes started naturally degrading :)

Interestingly enough though, you can also get the same effect with standard text. Here is the height map on the left and the output image on the right. To be fair these are a little trickier to see.